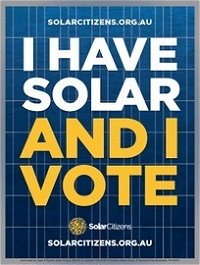 A survey conducted last week found renewable energy was the third most important issue for voters in the Western Australian electoral division of Canning – and solar can help with their other pressing concerns.

Seen by some as a make-or-break situation for the Abbott Government, specifically for Prime Minister Tony Abbott himself, the 2015 Canning by-election will be held on 19 September.

While jobs and cost of living are at the forefront of Canning voters’ minds, so is the issue of renewable energy according to a ReachTel poll conducted last Monday for Solar Citizens, The Wilderness Society and the Conservation Council of WA.

“Renewable energy addresses all those concerns. Renewable energy will drive jobs and economic growth and drive down the cost of living by helping with electricity bills,” said Solar Citizens National Director Claire O’Rourke.

According to Energy Matters, a 5kW solar power system installed in Mandurah can return a financial benefit of between $1,496 and $2,150 annually; depending on installation and power consumption scenario. Solar has become increasingly affordable and accessible in Western Australia; particularly since the advent of zero deposit payment plans and other options.

“Renewable energy is a huge growth industry in Canning and Western Australia, especially with the mining boom coming to an end,” said Ms. O’Rourke. “This poll shows that the people of Canning will vote for a party that adopts ambitious renewable energy policies.”

According to Solar Citizens, the poll found nearly two-thirds of Canning voters support Labor’s 50% renewable energy target and 23% of undecided voters stated renewables were their number one issue of importance.

Canning is a solar stronghold; with half of homes having installed solar panels and/or solar hot water. The Canning postcode with the highest number of solar power installations is 6210, which includes the suburb of Mandurah.

Solar Citizens has published a Canning campaign page, showing people how they can show their support for solar.

“This is our opportunity to send politicians a definitive message that will echo nationwide – we love our solar, and we vote,” says the group.

Another solar advocacy group very active in the electoral division is the Australian Solar Council, which has been letterboxing all voters in Canning. The Council is also holding a Save Solar forum between 10.30am – 12.30pm on Sunday, 13 September at the Mandurah Bowling and Recreation Club.