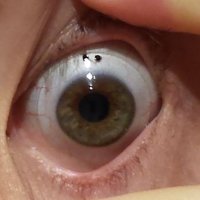 Google Glass is just so 2014 it seems. The giant of search has just been awarded a patent for a wearable light-powered monitoring and communication device that would sit directly on your eyeball.

The patent envisions one of the applications of the device would be to monitor glucose, lactate or urea levels, internal body temperature and/or blood alcohol content of the wearer of the contact lens.

It could also be used to monitor and alert to external hazards – “biological, chemical and/or microbiological features in an environment including, but not limited to, levels of hazardous materials, levels of allergens, the presence of various organisms or species or the like.”

The contact lens could communicate this information to a device such as a cell phone.

The contact lens device could be powered by the sun or low-level background light. We assume it would come with a warning not to stare directly at the sun. That would be bad.

We imagine other interesting applications for the light powered contact lens – blink a few times in rapid succession and it takes a photo. Another blink sequence could trigger a search on a Google of the object being viewed.

The device could get around some of the issues Google Glass is facing; such as people’s reactions to Glass wearers concerning their privacy that has led to the term “Glasshole” being applied. Wearers of such a contact lens would be hard to identify.

Exciting or spooky technology? Perhaps a bit of both.

The patent is pretty heavy reading, but if you’re interested, you can view the patent document here.

Kudos to Quartz for spotting this one.

It’s not the first time solar has featured in developments relating to the eye. Earlier this year, Stanford University researchers developed a retinal implant that uses solar power to assist patients suffering from degenerative eye diseases.