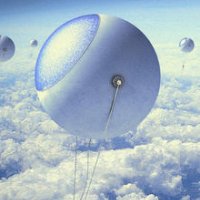 The idea, according to electro-chemist Professor Jean-François Guillemoles, is to rise above the pesky clouds that hamper the production of solar energy by using hydrogen-filled polymer balloons fitted with solar cells.

“The main problem with photovoltaic energy is that sunlight can be obscured by clouds, which makes electrical production intermittent and uncertain. But above the cloud cover, the sun shines all day, every day,” Professor Guillemoles says.

“Anywhere above the planet, there are very few clouds at an altitude of 6 km—and none at all at 20 km. Under these conditions, the energy source is five times more abundant than on the ground, and production is entirely predictable. So why not send solar cells up above the clouds, where the sun always shines?”

The concept would involve mounting solar panels on high-altitude polymer balloons, which could be tethered to the ground or float free. During the day, electricity would be sent back to earth via cable or transmitter, with a portion of the current producing hydrogen from an attached fuel cell. At night, the fuel cell takes over, providing 24-hour energy.

“A moored high-altitude balloon of reasonable size could store about 10 days equivalent of its own solar electricity production, which is more than enough to meet energy needs overnight, until production resumes in the morning,” Professor Guillemoles says.

Professor Guillemoles states solar balloons could help address an issue raised at the COP21 climate summit in Paris: the need for a vast scaling-up in the deployment of renewable energy in order for clean technologies to make a significant difference in the global energy mix. Under this scenario, solar would need to provide around one terawatt of continuous electric power worldwide.

The professor admits his concept may sound outlandish, but a consortium named NextPV has been formed by the French National Centre for Scientific Research (CNRS) and Tokyo University to explore the possibility of launching a prototype solar balloon. A seminar on the project was held at the French Embassy in Tokyo in September.

It’s not just solar power that could perhaps benefit from not being terrestrially-bound – check out the Altaeros airborne wind turbine.