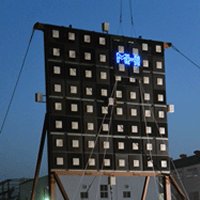 If/when beaming solar power from space becomes reality, it will be in part due to the pioneering efforts of Mitsubishi Heavy Industries and a Japanese space agency.

We first covered what was then called the solar power satellite (SPS) or Powersat concept in 2008. Also in 2008, Former NASA executive and physicist John Mankins captured solar energy from a mountain top in Maui and beamed it nearly 150 kilometres to the main island of Hawaii. In that experiment, 20 watts was transmitted and most of it was lost in the process.

Then in 2009, Mitsubishi Electric Corp announced it had joined a multi-billion dollar Japanese project to construct a gigantic solar farm in space within three decades.

Early last year, the U.S. Navy began tinkering with the idea of beaming electricity from space using a massive array of solar panels assembled in orbit by a team of robots.

Initial testing has been promising. MHI states they were able to transmit 10 kilowatts via microwave over a distance of 500 meters; where it illuminated LED lights.

The development and testing occurred through  an agreement with Japan Space Systems under what’s called the “2012 Solar Power Wireless Transmission Technology Development Project.”

Mitsubishi says the successful test results clearly demonstrate proof-of-concept and is a precursor to applying the technology in numerous terrestrial fields; such as the transmission of power from offshore wind turbines or even powering electric vehicles.

The applications also extend from terrestrial to out of this world. MHI envisions a geostationary satellite decked out with solar panels positioned 36,000 kilometers above the earth; with the power generated transmitted to earth by microwave/laser

“The SSPS is highly anticipated to become a mainstay energy source that will simultaneously solve both environmental and energy issues,” says Mitsubishi.

An in-depth look at space based solar power generation, published last year, can be viewed here. The article was written by Susumu Sasaki, who has spent much of his 41-year career at Japan Aerospace Exploration Agency (JAXA) researching space-based solar power systems.

While SSPS is a very interesting prospect, it’s not without its potential problems – and there are still plenty of rooftops here on Planet Earth waiting to have solar panels installed on them.