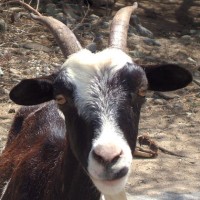 Goats and sheep will be used at a solar farm in Japan in order to help maintain electricity generation at the facility.

It’s not uncommon for livestock to graze around solar panel arrays to keep weeds in check, but usually it’s not linked to electricity production.

According to an article on Nikkei Technology, it seems the animals will be rolled out (not literally) at a 43MW solar farm in Yonago City, Tottori Prefecture.

Part of their mission, should they choose to accept it, is to keep vines from growing on fences at the facility that can throw shadow on solar panels nearby, decreasing the amount of electricity they generate.

The vine in question is Pueraria Lobata; more commonly known as kudzu. While kudzu has medicinal properties and other uses, it can grow like, well, a weed.

Native to much of eastern and Southeast Asia, kudzu spreads very quickly. It has earned a reputation in the USA as the “plant that ate the south” and is also becoming a problem in northeastern Australia.

The Japanese trial will also compare carbon dioxide emissions of munching versus mowing.

While the trial is being taken very seriously (one of the animals will even have a GPS tracker to record its movements) and approached scientifically, it will also have a warm and fuzzy aspect. The company believes the trial will boost the number of visitors to the facility and adjoining environmental center, plus have a “therapeutic effect” on local residents and office workers.

Four sheep and two goats will be tasked with weeding a 72,000m2 section of the facility.

Animals and solar PV farms have generally been co-existing peacefully for years, with benefits to both parties. The same can’t really be said for coal mines.

As well as livestock, solar farms can be a haven for other animals and plants. A recent report on a study of 11 solar farms states the solar facilities overall had greater biodiversity than control plots.

“The sites with the highest wildlife value were seeded with a diverse seed mix upon completion of construction, limited the use of herbicides, provided good marginal habitat for wildlife and employed a conservation grazing or mowing regime.”