NASA’s first solar-powered helicopter drone has landed on Mars, and it is hoped that it will be able to provide us with never-before-seen images and video of the Red Planet.

The helicopter is called Ingenuity, and it was deployed by mother ship Perseverance on Saturday, April 4. It is expected to make its first flight on April 11, which will make the first time a helicopter has ever been used on another planet.

The $85 million drone has two cameras on board, and footage will be relayed back to Perseverance before it makes its way back to Earth. 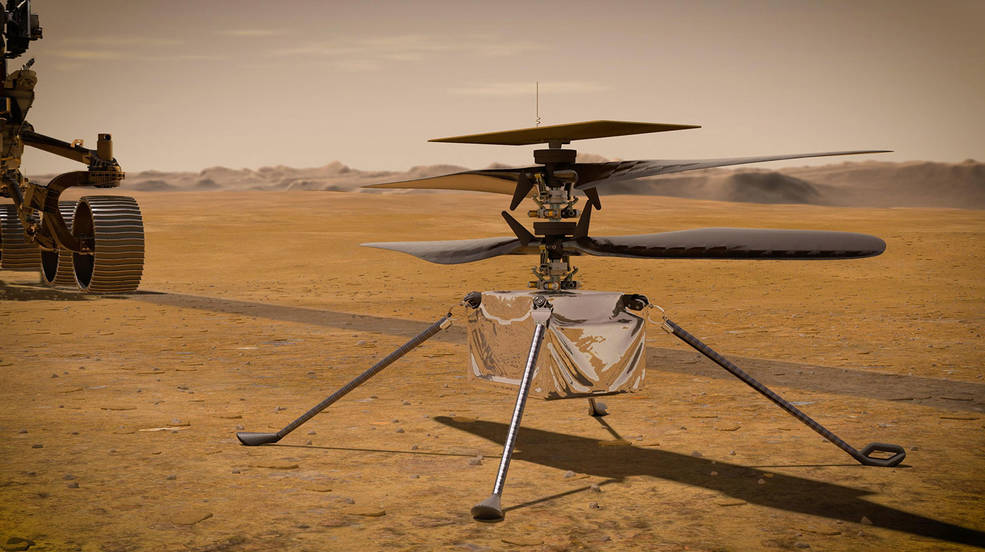 In this illustration, NASA’s Ingenuity Mars helicopter stands on the Red Planet’s surface as NASA’s Perseverance rover (partially visible on the left) rolls away.
Credits: NASA/JPL-Caltech

Extreme cold is the biggest challenge the drone faces on Mars

While the Red Planet is well known for its scorching temperatures during the daylight hours, it is the night time that poses the most threat to Ingenuity. Weighing just 1.8kg, it will need to endure temperatures plummeting to as low as minus 90 degrees Celcius.

This can cause moving parts to run under a much higher load, leading them to fail. So Ingenuity has a built-in heating system powered from a battery that will harvest the energy required during the daylight hours to ensure it doesn’t freeze before its maiden flight.

“This heater keeps the interior at about 45 degrees F through the bitter cold of the Martian night, where temperatures can drop to as low as -130 F (minus 90 degrees Celsius),” NASA’s chief engineer for the Ingenuity project Bob Balaram outlined in a status report.

“That comfortably protects key components such as the battery and some of the sensitive electronics from harm at very cold temperatures.”

What NASA hopes to achieve with Ingenuity

The maiden flight and any consequent journeys will be more about testing aerial exploration vehicles, rather than delivering new information. As this is the first helicopter on Mars, the data will be used to develop future aircraft that can be deployed on other worlds to help us explore regions we have not been able to access before.

“Ingenuity is a technology demonstration that aims to be the first powered flight on another world and, if successful, could further expand our horizons and broaden the scope of what is possible with Mars exploration,” NASA director of the Planetary Science Division Lori Glaze said.

Solar power has become the cornerstone of exploration on Mars. The two most recent Exploration Rovers, Spirit and Opportunity, have gathered enormous amounts of information using power derived directly from the sun. They used technology that is considered primitive today, but their success means future Rovers will be able to push deeper across the surface of Mars.

It is also hoped that solar panels will sure up the International Space Station’s future with a significant upgrade underway. The ISS has struggled to gain funding in recent years, but these new solar upgrades are set to ensure it continues operation until at least 2030.