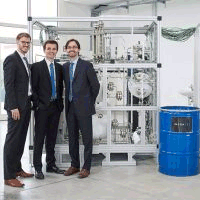 A new device that fits inside a shipping container and uses solar power to extract high-quality renewable fuels from the atmosphere has been unveiled by German and Finnish researchers.

Known as SOLETAIR, the compact reactor is capable of converting ambient carbon dioxide into gasoline, diesel and kerosene. The project has been a multinational cooperative effort between Germany’s Karlsruhe Institute of Technology (KIT), the Lappeenranta University of Technology (LUT) and VTT Technical Research Centre of Finland.

The plant is made up of three components, each designed by separate research groups.

KIT spinoff, INERATEC GmbH, which specialises in microstructured chemical reactors, was chosen to manufacture and commercialise the plant.

“Projects such as SOLETAIR are essential for the success of the energy turnaround,” said Professor Thomas Hirth, Vice President for Innovation and International Affairs at KIT.

“Commissioning of this pilot plant is an example of successful transfer of KIT’s research innovations to industry.”

The researchers will use SOLETAIR to demonstrate how renewable energy can help the energy industry transition away from fossil fuels. By utilising solar power to convert carbon dioxide into usable fuels, gases and chemicals, they hope to speed the “energiewende”; the Energy Transition – a switch to 100 percent renewables and the abolition of coal and non-renewable sources of power.

They say the demo plant will be used on show at LUT in 2017 and could be used as a fuelling station for hydrogen and natural gas-powered vehicles. They also hope to show off the successful partnership between institutions and business.

“The project will produce expertise for enterprises in various fields, and it will result in multidisciplinary industrial integration that no one company can achieve on its own. Collaboration will strengthen the expertise of Finnish industry in this sector,” said VTT’s Principal Scientist Pekka Simell, coordinator of the SOLETAIR project as well as VTT’s share of the research.

The program was funded by a one million euro grant from Finnish Funding Agency for Technology and Innovation (Tekes).