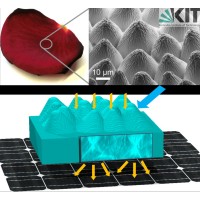 Another application of biomimicry, this time based on rose petal structure, has boosted the conversion efficiency of organic solar cells.

Biomimicry searches for answers to various technology challenges through emulating nature’s own solutions. In the field of solar research, biomimicry has been utilised to assist in boosting sunlight conversion efficiencies.

Researchers at the Karlsruhe Institute of Technology (KIT) in Germany and several other institutions have copied attributes present in the epidermal cells of rose petals to increase the relative efficiency of an organic solar cell by 12 per cent.

After studying various plant species, the researchers found the epidermis of rose petals was made up of a disorganized arrangement of densely packed microstructures, with ribbing formed by randomly positioned nanostructures. In a rose, these attributes provide stronger color contrasts and increase the chance of pollination.

The epidermal layer of a rose petal was transferred to a mold made of a silicon based polymer; with the resulting negative structure pressed into an optical glue and cured under UV light. Apparently, the process is relatively simple and cost effective. 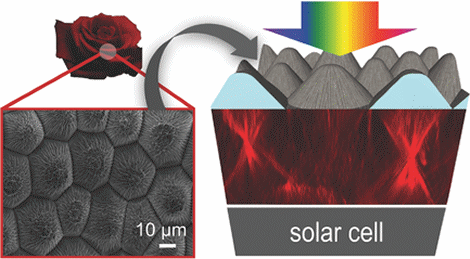 The transparent replica of the rose petal epidermis was then integrated into the solar cell, where it demonstrated the 12% efficiency gain for vertically incident light. At shallower incident angles, the gains were even higher.

The boost in efficiency was attributed to a reduction in surface reflection below five percent, even at a light incidence angle of nearly 80 degrees. Each epidermal cell also acts as a microlense.

“Our method is applicable to both other plant species and other PV technologies,” says Dr. Guillaume Gomard, Group Leader of the Nanopothonics project at KIT’s LTI. “Since the surfaces of plants have multifunctional properties, it might be possible in the future to apply multiple of these properties in a single step.”

A paper on the research was recently published in the journal Advanced Optical Materials.

Other examples of biomimicry applied to solar research include attributes of moth eyes and the lotus leaf, sunflowers and butterflies.

The Karlsruhe Institute of Technology is one of the largest and most prestigious research and education institutes in Germany.