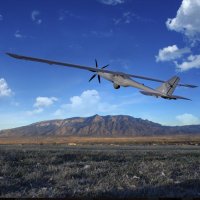 We first covered Silent Falcon back in 2012 and it looks like it’s come a long way since then.

Boasting a flight endurance of 5+ hours on average, the latest iteration of the craft has a range of up to 100 kilometers. Thin film solar cells help charge the lithium polymer battery that powers the UAS.

The UAS is launched with a spring catapult and uses a parachute recovery system. From arrival on site to fly time is an estimated 30 minutes.

Its makers say one of its outstanding features is, as the name implies, lack of operating noise. The company states it is undetectable at less than 100 meters above ground level.

Various payloads have been developed for Silent Falcon, including various ISR (intelligence, surveillance, and reconnaissance) EO/IR sensors, a gas imaging Midwave Infrared camera, Hyperspectral camera and a spectrometer. All payloads can be quickly and easily fitted into the open bay.

Silent Falcon has a myriad uses; including disaster relief, mapping and surveying, crop and livestock monitoring and of course, military applications.

Earlier this month, Silent Falcon was granted an Airworthiness Statement from NASA, enabling it to participate in the NASA UTM (Unmanned Traffic Management) project co-ordinated by the Ames Research Center.

The project involves testing the ability to alert and inform other airspace users of potential dangers and conflicting situations that go BVLOS (Beyond Visual Line of Sight) and within VLOS (Visual Line of Sight). This is with view to safely enabling large-scale UAS operations in the low-altitude airspace.

“This project is extremely important to the UAS industry and is of particular interest to us as we manufacture a long range, long endurance fixed wing UAS that was designed for BVLOS applications,’ said John Brown, Silent Falcon UAS Technologies President & CEO.