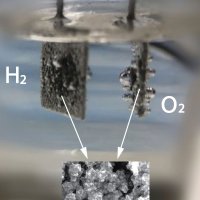 One of the many exciting frontiers in renewable energy research is the development of cheaper and more efficient ways to harvest hydrogen from water. This is due to its potential as a round-the-clock clean fuel and energy storage solution.

The process of electrolysis used in splitting water to capture hydrogen requires a lot of energy, making the technology a good fit for variable energy sources like wind and solar power; wind which often produce surplus energy.

The benefits are two-fold: while surplus renewable energy can be utilised to drive the water splitting process, generating hydrogen fuel that can power fuel cells and electric vehicles; this “renewable fuel” can also be stored as backup for intermittent sources of grid-connected energy.

Washington State University engineers now believe they have taken another step towards better hydrogen production by using nanotechnology to produce a catalyst that conducts electricity better than previous catalysts; while avoiding the use of rare and precious metals.

Not only does hydrogen production need a vast amount of energy – energy commonly sourced from fossil-fuels – the catalysts used to convert water into its constituent atomic parts are usually made from expensive rare-earth metals such as platinum and ruthenium.

The prohibitive cost of these metal catalysts has to some shunning water-splitting technology, or fuelling the technique with highly polluting energy sources.

By adding nanoparticles of highly conductive copper to a cobalt-based framework, the WSU team’s catalyst performed the electrolysis process better than catalysts made from platinum. When an electric current is passed through the device oxygen atoms are drawn to and merge around the cobalt-based electrode.

The team say their catalyst produced oxygen better than existing commercial catalysts and produced hydrogen at a comparable rate.

“Hydrogen production by electrolysis of water is the greenest way to convert electricity to chemical fuel,” said Junhua Song, a WSU Ph.D. student who synthesized the catalyst and performed most of the experimental work.

Key to the WSU work was finely detailed atomic modelling and experimentation of the catalyst and its enhanced performance once copper nanoparticles were added to the structure.

“The research team has provided a new perspective in designing and improving non-precious metal-based catalysts for hydrogen production,” said Lin. “This catalyst will pave the way for the development of high-performance, electrolysis-based hydrogen production applications.”

The researchers are looking for external funding to scale up their work; with which they hope to improve the catalyst’s stability and efficiency.