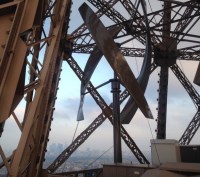 UGE International Ltd. has installed two on-site wind turbines on the Eiffel Tower as part of a major renovation to the first floor of the iconic structure.

The vertical-axis VisionAIR5 turbine has a height of 5.2m and a width of 3.2m. It has a cut in wind speed of 3.5 m/s and a survival wind speed of 50 m/s. UGE says the VisionAIR5 has been designed for a service life of at least 20 years and is ‘quieter than a human whisper’.

“The Eiffel Tower is arguably the most renowned architectural icon in the world, and we are proud that our advanced technology was chosen as the Tower commits to a more sustainable future,” said Nick Blitterswyk, CEO of UGE. “When visitors from around the world see the wind turbines, we get one step closer to a world powered by clean and reliable renewable energy.” 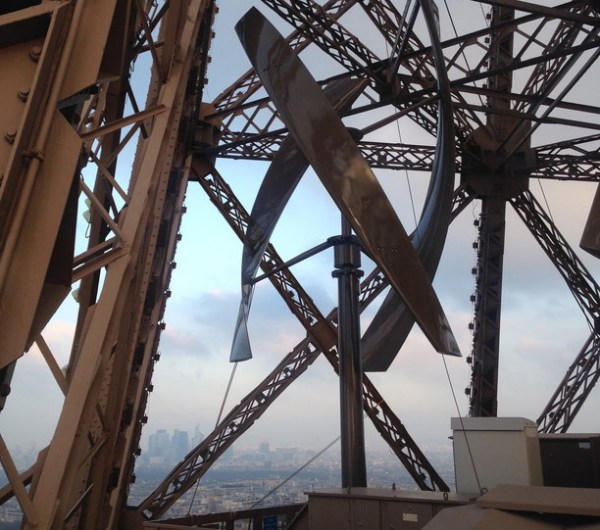 In addition to wind power, the first floor renovation also included LED lighting and a solar hot water system mounted on Ferrié Pavilion; the output of which will supply approximately 50% of the water heating needs of the first floor’s two pavilions.

A rainwater recovery system has also been installed to provide flushing water for toilet facilities.

High-performance heat pumps have been integrated to improve temperature control and glazing has been used to reduce summer solar heat gain by more than 25%, reducing air conditioning related energy consumption.

The renovation project was the most ambitious Eiffel Tower refurbishment in nearly 30 years.

As with the Sydney Harbour Bridge, painting is a major maintenance task. 60 tonnes is used for every 7 year repaint.

More than a quarter of a billion people have visited the Eiffel Tower since it was opened.