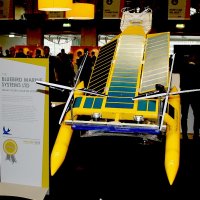 The full size, semi-autonomous wind and solar powered version of this model may be able to scoop up 22,400 tons of plastic trash from the ocean each year.

Plastic is everywhere in our oceans, but it becomes particularly concentrated in a number of locations where currents swirl, called gyres.  One of these is the North Pacific Gyre; which also has the unfortunate nick-name of the Great Pacific Garbage Patch.

It’s estimated that for every one kilogram of plankton in this area, there’s around 6kg of plastic garbage; everything from bottles, bags and nets to tiny fragments.

As well as leaching chemicals into the water, the plastic fragments are ingested by marine life. These plastics can create digestive tract blockages and eventually cause death by starvation. Last year, researchers from CSIRO and Imperial College London predicted almost all seabirds will have plastic in their gut by 2050.

An ounce of prevention is worth a pound of cure, but given the plastic genie is out of the bottle; how do we clean up this mess? Just letting nature deal with it could mean a very long wait and a great deal of carnage in the interim.

One possible solution we’ve covered in the past is the Ocean Cleanup Array. On a far smaller scale is the solar assisted WaterWheel, which has been in operation for some time in Baltimore’s Inner Harbor and is performing well.

Here’s another potential player – the SeaVax, from BlueBird Marine Systems. 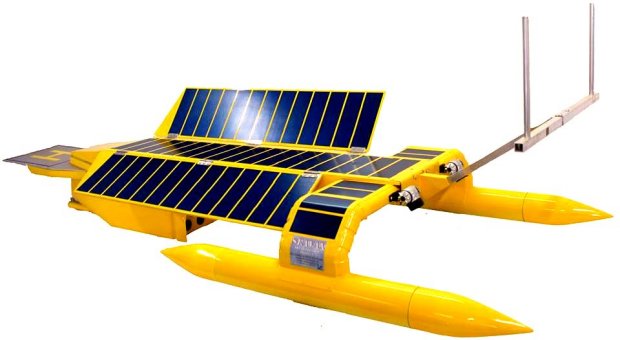 Designed to work in a fleet program called SeaNet, the SeaVax would scoop up “plastic soup” and then shred it. This would be then pumped into a 150-tonne capacity holding bay where the waste is graded according to size. The filtered water exits at the rear of the ship.

The collected plastic could be transported to shore on solar powered barges and the waste then recycled.

The SeaVax would also be equipped with sensors to shut down operation if marine life is detected in its path.

Powered by solar panels and a couple of small wind turbines (not shown on the image above), one SeaVax ship should generate enough energy to treat 89.9 million liters of seawater a year.

BlueBird Marine Systems says it is currently working on a plan to manufacture SeaVax drones via subcontractors.

As to how much this would all cost, each SeaVax would carry a price tag of around USD $3 million dollars; assuming efficient mass production on a not-for-profit basis. The company says this figure compares favourably with other solutions. Based on that pricing point, the cleanup cost would be around USD $1.49 per kilogram.