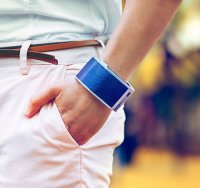 SolarHug, designed by a 20 year old student, is a wearable solar power system with a couple of interesting additional features

SolarHug is aluminum bracelet covered with flexible solar panel. The solar panel, described as “almost indestructible and flexible”, can provide a charge in low light conditions; including indoors.

Energy is stored in a 2000 mAh battery. By way of comparison, the capacity of an iPhone 5 battery is 1440mAh. Weighing just 80 grams, the bracelet is 7 millimeters thick and the module is 45 millimeters wide.

The device includes an LED indicator showing state of charge and can also be used as a torch of sorts.

Additional features include a 128 gigabyte USB drive and cables – a 6 cm  USB cable and a 12 cm microUSB or Lightning cable. As well as smartphones, the device can also be used to charge cameras, MP3 players etc. and SolarHug can also be recharged via USB. Some models will feature inductive charging.

Electrical engineering student Pavol Bujna, left his home in Bratislava, Slovakia to seek opportunities in the UK. During his time in Reading, he began working on SolarHug – and it’s now almost ready for prime-time.

Mr. Bujna has returned to Slovakia and is now is seeking funding to enable a commercial rollout via KickStarter. Assuming the fundraiser succeeds, shipping of pre-ordered SolarHug bracelets via KickStarter is expected to begin in April next year; with general availability commencing in May/June of 2015.

Other wearable solar devices recently launched include a solar powered jacket created through a partnership between Pvilion and Tommy Hilfiger. Featuring detachable Pvilion solar panels, the modules connect to a removable 6000 mAh battery pack in the jacket’s front pocket.