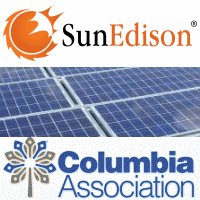 A new solar power station has enabled Columbia Association to complete its transformation to running facilities and services in Columbia, Maryland on 100 per cent renewable energy.

Columbia is an unincorporated city of nearly 100,000 people that was established in the 1960’s; part of the New Towns Movement in the United States. Its founder, James Rouse, sought to build a complete city that would respect the land and provide for the growth of people as well as making a profit.

Columbia Association (CA) is the nonprofit service corporation that manages Columbia. It operates a vast array of infrastructure, recreational, cultural and community services within the community; including fitness facilities, tennis clubs and dozens of swimming pools.

Columbia Association had been sourcing 75 percent of its energy from wind renewable energy credits. The final 25 percent is now being generated by a newly completed two megawatt solar farm; a project of SunEdison and Bithenergy.

The Nixon Farm solar project is located West Friendship, Maryland. Electricity generated by the plant is provided to Columbia via virtual net metering and under a 20 year power purchase agreement with SunEdison.

“With the completion of the Nixon Farm solar power plant, the people of Columbia now enjoy the environmental and cost benefits of getting 100 percent of their electricity from renewable sources,” said Steve Raeder, SunEdison’s general manager of Eastern U.S. commercial and industrial solar.

SunEdison supplied solar panels and financing for the construction of the project. BithEnergy originated the project with Columbia Association, completed the permitting, site work and pre-construction services. SolAmerica built the solar power plant to SunEdison’s specifications. Ongoing operations and maintenance will be carried out by SunEdison Services.

“Columbia Association is proud to be a leader in clean energy,” said Jeremy Scharfenberg, Columbia Association’s energy manager. ” By supplementing Nixon Farm’s solar energy with wind-based renewable energy certificates, we’ve been able to achieve our sustainability goals and reduce our carbon footprint by more than half.”

In addition to its renewable energy efforts, Columbia Association has been very active as an Energy Star Partner with the U.S. Environmental Protection Agency (EPA), promoting the benefits of the program to the community as well as carrying out various energy efficiency upgrades within the facilities it operates.