SunEdison, Inc. (NYSE: SUNE) has announced the signing of a memorandum of understanding with the state government of Karnataka in India to develop five gigawatts of solar energy and wind power in the state over the next five years.

As in other states in India, many residents of Karnataka do not have access to electricity or supply is intermittent.

SunEdison says the electricity generated under the agreement will be cost competitive with coal-fired power generation – and without the need for subsidies or other incentives. It’s intended between 1,000 megawatts and 1,500 megawatts capacity will be constructed before the end of next year.

” The energy leadership in the state is determined to make a significant positive impact for the people and businesses of Karnataka, and we are excited about the opportunity to work with them to make this positive change.”

SunEdison has also announced details of a partnership with OMC Power to develop 5,000 solar projects throughout rural India over the next three to five years. 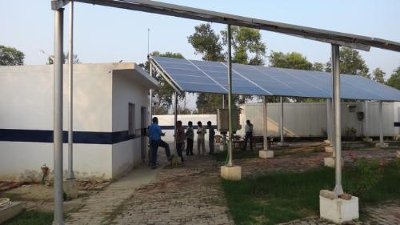 The 250 megawatts (MW) collective capacity of these projects will provide some of the 400 million people in India who have no access to electricity with clean power via 36 kW micro power plants. A little power can go a long way in countries such as India, providing basic lighting and a means to recharge mobile communications devices.

Prior to this project announcement, SunEdison was already in the process of building dozens of solar power micro-grids as part of its Eradication Of Darkness program.

” What is most exciting about this partnership is that SunEdison is embarking on its purpose of transforming lives in a very big way,” said Ahmad Chatila, President and Chief Executive Officer of SunEdison. “Solar electricity costs have come down dramatically and continue to come down, thus making it a better choice than conventional fossil sources. We don’t have to make a false choice between cost and clean power any more.”

Pashupathy Gopalan said the company would not rest until ” we have changed the lives of the hundreds of millions of people around the world who are underserved and underprivileged.”