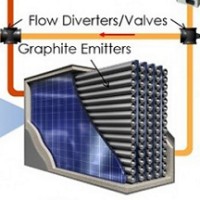 Engineers from the Georgia Institute of Technology believe high temperature thermophotovoltaic “blocks” will one day provide a cheap and efficient alternative to the combined-cycle electric turbines currently used to convert heat into energy inside utility-scale CSP facilities.

Thermophotovoltaic (TPV) cells work like standard solar cells, except they only harness infrared light – that is, heat – and convert it directly to electricity. Usually consisting of an emitter and a photovoltaic power converter, the team boosted the efficiency of their model by adding a silver-based reflector to bounce unused photons back to the emitter.

In a study published in the journal Energy and Environmental Science, the engineers envision a combined CSP and thermal energy storage (TES) system operating at temperatures above 1,300 degrees Celsius. Heat would be used to melt silicon, which would be stored in large insulated tanks until required. As the silicon cools and solidifies, heat would be released and converted into electricity by the TPV cells.

Just a quick note: silicon is neither metal nor non-metal; it’s a metalloid. It has properties intermediate between those of typical metals and nonmetals. 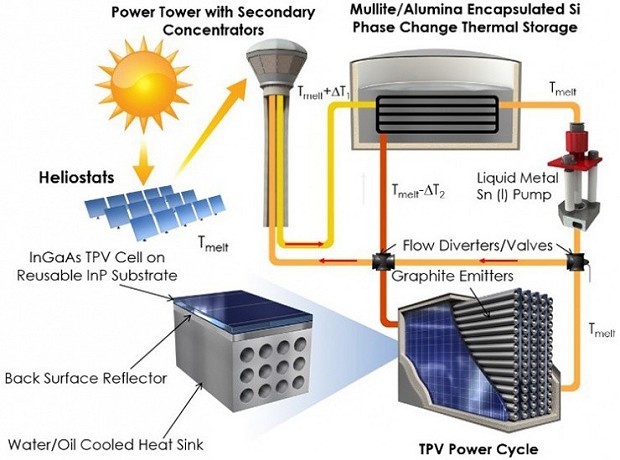 “The entire system could be quite efficient if we understand where the heat is flowing and design appropriately.” said Asegun Henry, an assistant professor in the George W. Woodruff School of Mechanical Engineering at Georgia Tech. “We believe there is a pathway to make these TPV cells an order of magnitude cheaper than turbines for converting thermal energy to electricity.”

“In the context of the full system, we suggest that the efficiency could one day rival the best heat engines available on the planet today.”

The most efficient and commercially viable engines available today are based on a tandem turbine system. Also known as combined cycle turbines, they use the same source of heat in tandem, converting it into mechanical energy, which in turn usually drives electrical generators.

But according to research assistant Hamid Reza Seyf, the technology is so well established it operates at close to its thermodynamic limits, leaving little room for improvements in efficiency.

A TPV system combined with concentrated solar and molten metal storage, utilising enhanced cells produced on recycled substrates and manufactured with components capable of operating at temperatures above 1,300 degrees Celsius, could produce efficiencies as high as 65 percent – a world record for heat engines.

“My hope is that this paper will help bring together the thermophotovoltaics and PV community with the CSP community to realize that the thermal and PV system takes advantage of both sides,” said Henry. “This is a heat engine that realistically may have a shot at beating the current record. This is a completely different technology, and there is a lot of research yet to be done.”