A woman living in Sydney’s inner western suburbs is aiming for grid independence. She has taken the first steps towards this goal by upgrading existing solar panels and adding a 7 kWh home battery.

Gayle Adams bought the $18,000 system through the Inner West Community Energy group. She has calculated that the 5.6 kW solar installation will pay for itself in five years and the battery around ten years.

Adams lives in Dulwich Hill in Sydney’s inner west. As reported in the Sydney Morning Herald, she was spurred to upgrading existing solar panels by the Coalition’s lack of a coherent energy policy. 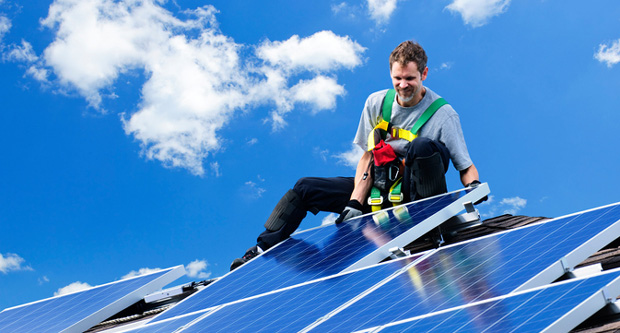 The Coalition also failed to get its ‘big stick’ legislation through Parliament earlier this month which would give the government powers over industry energy investment.

Meanwhile, the ‘Solar Trends Report for Solar Citizens’ concludes that solar is an excellent investment for virtually all Australian households.

The report was commissioned by Solar Citizens, with the Australian Photovoltaic Institute and the University of New South Wales collating the data. It found that:

The report also found that most households with solar panels would recoup that investment in around 3-7 years.

In addition, it shows electricity from rooftop solar jumped by a third in the past year to 8,900 GWh. This is close to the annual output from the Liddell coal-fired power station in NSW.

According to Australian Photovoltaic Institute chair Renate Egan, the Federal Government’s lack of energy policy has “caused the [solar] industry to grow”.

Meanwhile, federal Labor has pledged a renewable energy target of 50 per cent by 2030 if it wins power in next year’s general election. A Labor Government would also introduce a $200 million solar battery rebate program for 100,000 households.