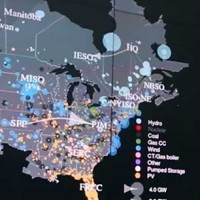 The USA’s National Renewable Energy Laboratory (NREL) has used a supercomputer and detailed visualisation software to model how well the eastern United States’ power grid could accommodate a vastly increased amount of wind and solar energy.

In its analysis, NREL mapped the entire Eastern Connection, a power system involving over 5,600 electricity generators and more than 60,000 transmission lines. The area covered is enormous, spanning from Florida to Maine and portions of Canada and as far west as New Mexico.

Researchers utilised NREL’s Peregrine supercomputer, which has a peak performance of 2.25 petaflops (2.25 million billion calculations per second), to track and record the operations of the power network.

The scenario-based study of four potential renewable futures found the grid could accommodate upwards of 30 percent annual penetration of wind and solar by the year 2026, when the network would likely receive far less power from fossil fuels.

“By modeling the power system in depth and detail, NREL has helped reset the conversation about how far we can go operationally with wind and solar in one of the largest power systems in the world,” said the Energy Department’s Charlton Clark, a DOE program manager for the study.

It showed the eastern U.S. power grid can handle much more solar and wind energy, but regulatory changes, innovative market strategies and providing flexibility for operators are key to the achieving this goal.

As more wind and solar come online, the ERGIS study found operators of traditional power sources like coal, gas and hydropower would be forced to ramp up and down more quickly in response to daily variations in supply. They would also operate for shorter periods as solar and wind meet more demand.

“Our work provides power system operators and regulators insights into how the Eastern Interconnection might operate in future scenarios with more wind and solar energy,” said Aaron Bloome, NREL project leader for the ERGIS study. “More importantly, we are sharing our data and tools so that others can conduct their own analysis.”

The full ERGIS report and accompanying tools can be viewed at NREL.gov/ERGIS