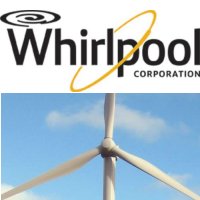 Appliance manufacturer Whirlpool Corporation has announced it will use wind energy to help power its manufacturing facility located in Findlay, Ohio.

The Findlay Wind Farm, a USD $18 million “Wind for Industry” project, will have five wind turbines with Whirlpool utilizing two and nearby Ball Company using three. The turbines are expected to offset an estimated 22% of the manufacturing facility’s electric consumption; with the two turbines generating enough clean electricity to power the equivalent of 600 – 800 average homes.

” The Findlay Wind Farm project is an example of how global companies like Whirlpool can make a positive impact at the local level, and the global level by minimizing the impact of our operations on the environment.”

Construction of the project, which is being financed by One Energy, is scheduled to begin in a couple of months and the wind farm is expected to be operational by the end of this year.

An offshoot of the project is Whirlpool’s $5,000 Megawatt Scholarship. Two scholarships (one per turbine) will be awarded annually each year the turbines are in operation to a graduating high school senior from the local school districts.

Among its other sustainability efforts, Whirlpool Corporation is also a member of the Alliance for Water Efficiency and the Alliance to Save Energy. The company says it has reduced the amount of water consumed to make one appliance from 272 gallons in 1975 to 39 gallons today.

Whirlpool now has almost 7 million square feet of LEED certified facilities and is also using electric truck lifts in the United States to further reduce emissions. A fuel efficiency program related to shipping products has seen the company save the equivalent of 7.5 million gallons of diesel fuel per year, reducing carbon emissions by more than 77,000 tonnes.

That so many companies are now looking to the wind and sun to produce electricity to power operations isn’t just a warm and fuzzy marketing ploy designed to appeal to eco-savvy consumers – it’s simply good business practice. Wind and solar power is becoming increasingly competitive with traditional mains grid supplied electricity, enabling companies to make substantial savings on energy.

While up-front costs were a barrier to many companies going solar just a few years ago, that barrier has been removed with the advent of leasing and Power Purchase Agreement (PPA) programs.