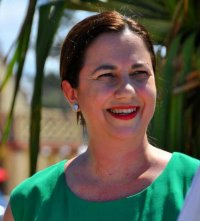 Queensland Opposition Leader Annastacia Palaszczuk has committed Labor to boosting the state’s renewable energy sector if it wins the election.

“In office Labor will call for proposals to generate 40-megawatts of base-load renewable energy including solar power. This will be used as a trial for more renewable power plants,” said Ms. Palaszczuk.

Labor would also investigate introducing competition in the power sector by enabling remote area councils to generate electricity from renewables to be sold at a lower cost to consumers.

“We will also initiate a renewable energy study to investigate measures to create an export-orientated renewable energy economy here in Queensland,” said Ms. Palaszczuk; who additionally promised an independent review to determine a fair price for a solar feed-in tariff based on all the benefits it provides, “rather than the requirements of large companies.”

Ms. Palaszczuk accused the LNP of being stuck in the past and pointed out after the last election Campbell Newman reneged on promises on renewable energy; cutting $660 million in related programs.

“The Queensland Opposition’s plan to generate 40 megawatts of power from solar and other renewable sources is a welcome move, particularly in light of the ongoing review of the federal Renewable Energy Target – which has caused investment in the sector to collapse,” said Mr Thornton.

“Labor has released a solar plan for the Sunshine State, which is responsible and affordable and will restore confidence in a battered solar industry,” said Australian Solar Council CEO John Grimes.

“Labor’s solar policy stands in stark contrast to the contempt shown by the Newman and Abbott Governments towards solar families and workers.”

If the Council’s Save Solar Community Forum in Townsville last week is anything to go by, the LNP should be very worried – it was a standing room only event. The next forum is at Springwood on Thursday, January 29.

Last week the Greens also unveiled their solar policy, which would ensure all Queensland solar households are paid a fair price for their electricity exports. The policy would also provide 100,000 extra households the opportunity to control their power bills by installing solar panels.