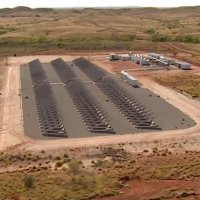 A microgrid solution from ABB is enabling Marble Bar and Nullagine in Western Australia to maximize solar power generation and minimise the use of diesel generators.

The microgrid is equipped with ABB’s PowerStore, a compact flywheel-based grid stabilizing generator. PowerStore stabilizes power systems; protecting against fluctuations in frequency and voltage. PowerStore can hold 18 MWs (megawatt seconds) of energy and shift from full absorption to full injection in 1 millisecond. ABB’s Microgrid Plus technology, also in use at the power stations, helps control the network.

According to ABB, the hybrid microgrid power solution is now supplying Marble Bar and Nullagine nearly 60 percent of their electricity through solar generation. The system is saving approximately 400,000 litres of diesel fuel annually and avoiding 1,100 tonnes of greenhouse gas emissions each year.

Dozens of similar ABB microgrid installations are now in operation throughout the world.

Earlier today, the company announced it would be constructing a PowerStore flywheel-based 500kW microgrid stabilization solution for the Marsabit wind farm in northern Kenya. A remote community of 5,000, electricity supply for the area relies on diesel generators and two 275 kilowatt (kW) wind turbines.

“Our microgrid technology solutions can significantly boost renewable integration and can play a key role in helping isolated and remote communities to gain access to clean electricity as in this case,” said  Claudio Facchin, President, Power Systems division.

ABB says microgrids are a focus area in the company’s Next Level strategy and a dedicated 1000 day program has been initiated to develop this aspect of ABB’s business.

In Australia, ABB has established a significant presence through its solar inverters, a popular choice in local commercial and residential solar power installations. The ABB Group of companies operates in around 100 countries and employs approximately 140,000 people.

ABB has roots dating back to 1883. Today, it is the product of many acquisitions and mergers, but primarily the 1988 merger of ASEA of Sweden and Switzerland’s BBC. In 2013, ABB acquired Power-One; which was one of the world’s biggest solar inverter manufacturers at the time.