The Clean Energy Council (CEC) is calling on Australia’s next federal government to turn the nation into a global clean energy superpower.

The CEC today sent an open letter to politicians ahead of the May 18 federal election. In the letter, the industry group points out that Australia’s 2020 Renewable Energy Target (RET) has driven record-breaking amounts of renewable energy generation. Additionally, the letter invites politicians to go to its 2019 election policy page.

However, having already reached its target, the RET will now phase out by 2030. The CEC says a “strong and enduring” energy policy should then replace it.

Established in 2001, the RET split into large and small renewable generation targets in 2011. As a result, large-scale renewable projects like solar farms and hydro-electric power stations were separated from small-scale renewables like rooftop solar power. 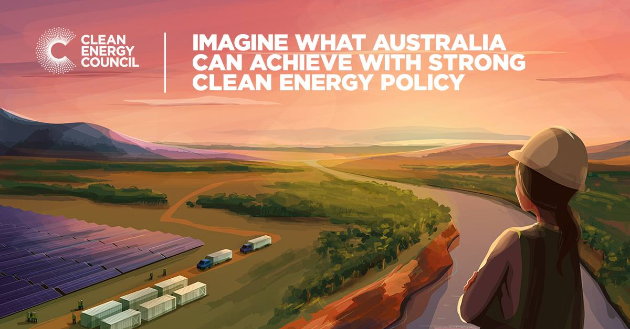 Let’s get serious about clean energy! That’s the message from the CEC as the federal election looms. Image: CEC

Because of the RET, Australia now has the skills and expertise to become a clean energy superpower, the CEC claims. It just needs “strong and long-term clean energy policy” to drive it.

The CEC also wants solar panels to be mandatory on all new homes built in Australia.

It also wants a legislated RET of at least 50 per cent renewable energy by 2030. Other suggestions include:

Replacing Turnbull, Scott Morrison dropped the NEG in favour of a “big stick” approach to national energy. The aim was to bring down energy prices using punitive measures to pull energy retailers into line.

However, the NEG could make a comeback: Labor will bring it back if elected in next month’s federal poll.

Labor Leader Bill Shorten will increase the NEG’s emissions reduction target to 45 per cent by 2030 under a Shorten Labor Government.