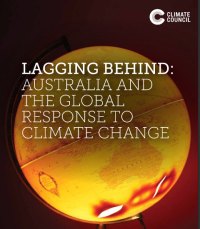 Investment in renewable energy during 2014 in Australia has dropped by 70 percent compared with 2013 states a new report from the Climate Council.

The Council also says any emission reductions achieved over the past few years in the nation’s electricity sector have effectively been cancelled out since the repeal of the carbon pricing mechanism. In the first 100 days since the carbon price repeal, Australia’s electricity generation related emissions were up 4 million tonnes on the equivalent period last financial year.

It was recently reported brown coal’s share of electricity generation in Australia had risen 4 per cent to 26 per cent and black coal’s slice has jumped 3 per cent to 51 per cent; thanks in part to the axing of the carbon tax.

The Climate Council says Australia has moved from climate change action “leader to laggard”, while most countries around the world have accelerated action as the consequences of not doing so have become increasingly clear. 39 countries have a carbon pricing scheme in place.

The USA, second in the world for renewable energy capacity, is on track to reducing emissions 17 percent below 2005 levels by 2020. More than half of US states now have renewable energy targets.

Australia, the 15th largest emitter of greenhouse gases globally, will struggle to reach its 5% emissions reduction target – and even if it should, the Climate Council says the goal is far too low.

The report, “Lagging Behind: Australia And The Global Response To Climate Change”, can be viewed in full here (PDF)

The Climate Council is an independent non-profit organisation funded by donations by the public.