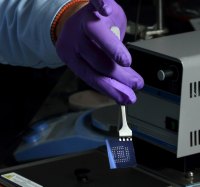 A breakthrough technique that lets scientists build dye-sensitised solar cells like old-fashioned ‘Tinkertoys’ could significantly improve the efficiency of the technology, according to USA’s Sandia Laboratory.

At Sandia, MOFs are known as ‘tinkertoys for chemists’ because they can be manipulated and organised to perform certain electronic functions, including helping the organic dyes in DSSCs absorb more solar energy.

“When you imagine the ‘Tinkertoys’ we played with as children, you recall they are essentially wooden balls with holes that you can link together with sticks,” Allendorf explained. “MOFs work the same way, only you substitute metal ions for the balls and organic molecules for the sticks.”

Although less efficient than silicon-based solar cells, DSSCs can make better use of sunlight by using varied or multiple dyes to capture different wavelengths in the solar spectrum. According to Sandia Labs, the researchers hope to use the ordered structure and versatile chemistry of MOFs to arrange the dyes in the most effective way possible.

“It becomes almost modular in terms of the cell’s components, all of which contribute to making electricity out of sunlight more efficiently,” said materials scientist Erik Spoerke.

The team received a $1.2 million grant under the U.S. Energy Department’s SunShot Next Generation Photovoltaic Technologies III program. The program supports projects demonstrating basic materials science that has proven to increase photovoltaic conversion levels in line with SunShot’s ultimate goal of lowering the cost of solar energy to $0.06 p/kWh by 2020.

In a statement, Sandia Lab said it was collaborating with the University of Colorado-Boulder on a potentially low-cost manufacturing process for DSSC/MOF using thin-film and atomic deposition technology.

“With the combination of MOFs, dye-sensitized solar cells and atomic layer deposition, we think we can figure out how to control all of the key cell interfaces and material elements in a way that’s never been done before,” said Spoerke. “That’s what makes this project exciting.”