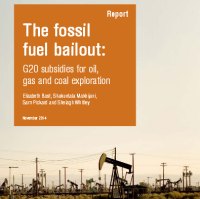 It’s been revealed Australian taxpayers are providing over $4 billion each year for the development of offshore and inland fossil fuel resources.

A single year of the subsidies is reportedly enough to install solar panels on half the homes in Queensland.

In the case of gas, the industry is being propped up to locate and develop a resource that the majority of will then be shipped out of the country – meanwhile local consumers are faced with rapidly increasing gas prices.

A report from the Overseas Development Institute and Oil Change International claims governments across G20 countries are estimated to be spending USD $88 billion every year subsidising exploration for fossil fuels.

“Many developed nations talk about ending our addiction on fossil fuels, about the need for radical cuts in carbon dioxide in order to avoid catastrophic climate change and yet, at the same time, they continue to subsidise the exploration of fossil fuels,” says part of a statement from Oil Change International.

“They are directing large volumes of finance into high-carbon assets that cannot be exploited without catastrophic climate effects; whilst diverting investment from economic low-carbon alternatives such as solar, wind and hydro-power.”

The subsidies provided to Australia’s fossil fuel sector are nearly 50% higher than what Russia provides to its own sector.

The report points out fossil fuel exploration is just one part of the subsidisation gravy train. Globally, subsidies for the production and use of fossil fuels were estimated at USD $775 billion in 2012; which is without factoring in the cost of the negative impacts of fossil fuels. Subsidies for renewable energy amounted to just $101 billion last year.

The report’s authors have called for a transfer of subsidies to support for the transition to low-carbon development and for governments to price carbon to reflect the social, economic and environmental damage associated with climate change.

“Removing public support for fossil fuels would rebalance our energy systems, forcing the industry to operate on a more level playing field.”

The Fossil Fuel Bailout: G20 Subsidies For Oil, Gas And Coal Exploration can be viewed in full here (PDF).