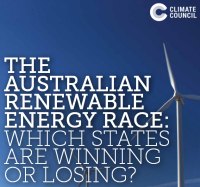 A new report from the Climate Council  provides a snapshot of current statistics, targets and policies on emissions and renewable energy in each of Australia’s states and territories.

Australia has more than enough renewable energy resources to provide for all our electricity needs. In fact, our country’s potential for renewable generation is around 500 times greater than demand. However, our addiction to digging up and burning fossil fuels is still very strong.

The report says Australia still has a comparatively low share of renewable electricity generation – seventh lowest among 28 member countries of the International Renewable Energy Agency (IRENA). The current federal government’s distaste for renewables and subsequent policy instability has resulted in a shocking year for large scale renewables; with a 70% slump in investment in renewable energy over the past year.

But it’s not all bad news. While New South Wales and Victoria in particular have gone from leaders to laggards when it comes to renewables, South Australia continues to make great strides.

The report states  South Australia now sources over 36% of its electricity from renewables and a quarter of the homes in the state have solar panels installed. South Australia has also added more large-scale renewable capacity since 2001 than any other state.

Victoria on the other hand  has actively discouraged renewable energy and investment in the sector has dried up. “Victoria now has the worst policy environment for renewables in the country. Victoria has no targets or policies to attract renewable energy,” says the report.

With so many supporters of solar and other renewables in the state; the issue may come back to haunt the current government at the looming state election.

New South Wales has been ranked last among the states for new per capita investment in renewable energy; but the recent NSW government Renewable Energy Action Plan may indicate a shift in the state’s approach.

The state with the highest amount of renewables in its energy mix is Tasmania at 93%; mostly due to its significant long-established hydropower resources.

The report recognises Queensland as having the most renewable energy jobs and the most solar power systems installed, but also the lowest proportion of renewables in its energy mix (6%).

The document also goes into detail regarding the renewables situation in Western Australia, Northern Territory and the ACT.

“The Australian Renewable Energy Race : Which States Are Winning Or Losing” can be viewed in full here (PDF).