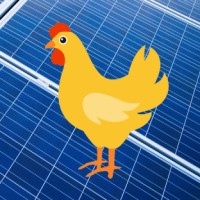 The float of Inghams will set feathers flying among poultry farmers throughout Australia; who will need look at cutting costs – and one way is with solar power.

Australia’s largest poultry producer was floated on the Australian Stock Exchange this week; an event that will have some major ramifications says Ric Spooner, chief market analyst at CMC Markets.

“While Ingham’s is a major player in a staple industry, this is a mature market and a stock that will be reliant on productivity gains and cost cutting to achieve growth targets,” he said.

Cost-cutting won’t just be at Inghams; but as a flow-on effect, right across the sector according to Peter Bedwell of Poultry Digest.

“As energy is a huge cost, renewable works really well because the huge shed roof space is good for solar panels. It will force people to grasp those opportunities sooner than people would have liked.”

According to the Australian Chicken Meat Federation, a typical new shed is 150 meters long and 15 meters wide. There are often three to ten sheds or “chicken houses” on the one farm. Hundreds of kilowatts capacity of solar panels could potentially fit onto each shed of that size.

Assuming a suitable installation scenario, a poultry farm fully decked out with commercial solar power systems could reap significant financial benefits in the form of a huge reduction in electricity bills. There’s also the prospect of commercial energy storage to consider, which is rapidly reducing in price.

Commercial solar installer Energy Matters says businesses with a rooftop of 200m2 or more and paying more than 15c/kWh for daytime electricity usage could see a payback time of between 5 and 7 years on a system sized to daytime load – after which time, the electricity generated is essentially free.

For businesses wanting to hold onto their capital, a solar power purchase agreement (solar PPA) may also be an option worth investigating as an alternative to outright purchasing.

Energy Matters has been installing commercial solar throughout Australia for the better part of a decade – a selection of portfolio projects can be viewed here. The company’s commercial team can be contacted on 1800-EMATTERS.