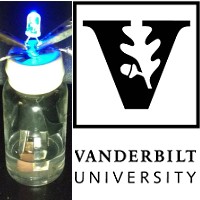 Researchers at Vanderbilt University in the USA have developed what’s been called the world’s first steel-brass battery; created from waste materials.

The invention was inspired by the Baghdad Battery (also known as the Parthian Battery), which dates back to the first century BC. While the Baghdad Battery comprised a ceramic terracotta pot, a copper sheet, an iron rod and was found with traces of electrolyte, it’s still not clear if it was an energy storage device.

Regardless, the Vanderbilt team admired the simple design and it spurred them on to try and develop a very simple, but useful battery.

Made from scraps of steel and brass and created with a chemical process at room temperature, the “junkyard” battery can store energy comparable to lead-acid batteries and charges/discharges at rates comparable to ultra-fast charging supercapacitors.

The key to the battery’s performance lies in anodization, which is used to give aluminum a durable and decorative coating. When the steel and brass is anodized using a common household chemical and electrical current,  the metal surfaces are transformed  into nanometer-sized lattices of metal oxide; with the attributes of being able to store and release energy when reacting with a water-based liquid electrolyte.

“Imagine that the tons of metal waste discarded every year could be used to provide energy storage for the renewable energy grid of the future, instead of becoming a burden for waste processing plants and the environment,” said Cary Pint, assistant professor of mechanical engineering at Vanderbilt University.

The prototype junkyard battery was tested after 5,000 consecutive charging cycles and it was determined it retained more than 90 percent of its capacity. The battery exhibits cell voltages up to 1.8 V, energy density up to 20 Wh/kg, power density up to 20 kW/kg.

By way of comparison, a conventional lithium-ion battery such as the 18650 cell format has an energy density of around 269 Wh/kg.

Professor Pint says he can envision a day when households make their own batteries.

“We’re seeing the start of a movement in contemporary society leading to a ‘maker culture’ where large-scale product development and manufacturing is being decentralized and scaled down to individuals or communities,” he said.

Professor Pint and his team’s work is described in more detail in the paper “From the Junkyard to the Power Grid: Ambient Processing of Scrap Metals into Nanostructured Electrodes for Ultrafast Rechargeable Batteries”,  published in the journal ACS Energy Letters.

“The simplicity of this approach, building from chemicals commonly available in a household, enables a simple pathway to the local recovery, processing, and assembly of storage systems based on materials that would otherwise be discarded,” state the authors.