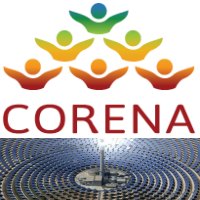 CORENA says the location could be a site identified in the Zero Carbon Australia Stationary Energy Plan; but a decision on the final location of the site will remain open for the time being.

It’s an ambitious target – however, if the $5 million goal for stage 1 isn’t reached, the funding will be used to build a less expensive utility-scale solar plant or to purchase part-ownership of a commercial project.

Should the campaign be successful, funding for stage 2 could begin. This stage would see construction begin with (for example), a central power block, molten salt storage tanks, and a 10MW power generation module.

This completed, the facility could commence operations as a peaking plant and sell electricity when prices are highest. The revenue would supplement voluntary contributions towards funding the second 10MW module. Resulting revenue from the first two modules would help fund the third, and so on.

” The fifth module might be almost entirely funded by revenue from the earlier modules. When all modules are completed, all profit from electricity sales, after operation and maintenance costs, would go straight towards building another citizen-owned renewable energy project,” says CORENA.

Donations for the Solar Thermal Big Win Project can be made here and further details viewed here.