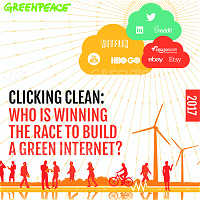 Apple, Google and Facebook have been lauded by Greenpeace for their renewable energy efforts in the organisation’s latest report.

” Clicking Clean: Who is Winning the Race to Build a Green Internet?” details the energy footprints of large data center operators and dozens of the world’s most popular websites and applications.

As the Internet is probably the largest thing humanity will ever build, greening the cloud is becoming an increasingly important issue. According to Greenpeace, the energy footprint of the IT sector accounted for 7% of global electricity in 2012, and may exceed 12% by 2017.

A significant chunk of this electricity is used in supporting video streaming, which made up 63% of global internet traffic in 2015 and could reach as high as 80% by 2020..

In the report, Apple, Google and Facebook were all given an “A” grade for their energy efforts. 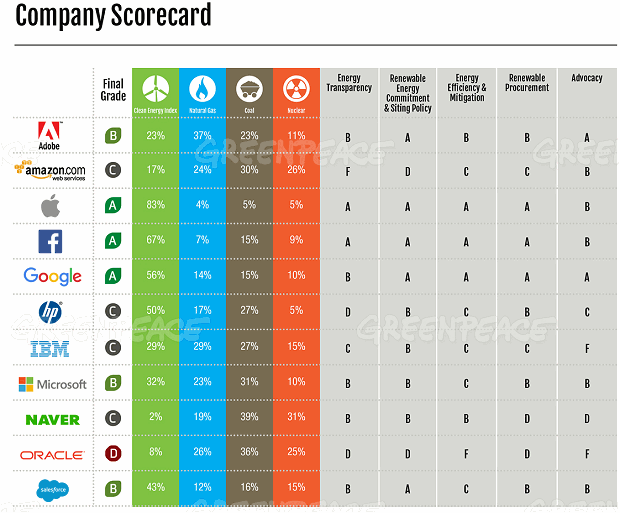 Facebook, Apple and Google made 100% renewable commitments four years ago. In December, Google said it will reach 100% renewable energy for its global operations this year.

The report is critical of Amazon Web Services, which Greenpeace says is “keeping its customers in the dark” on energy related decisions. Netflix also scored a scowl.

“The company announced in 2015 that it intended to fully offset its carbon footprint, but a closer examination reveals it is likely turning to carbon offsets or unbundled renewable energy credits, which do little to increase renewable energy investment,” says Greenpeace.

Greenpeace is calling on all major internet companies to not only make a long term commitment to become 100% powered by renewable energy sources, but to also commit to transparency on energy issues and developing formal strategies for procuring renewables.

“Ultimately, the largest players will be deciding whether our entire digital footprint is powered with renewable energy or antiquated fossil fuels,” says the group.

Greenpeace began benchmarking the energy performance of the IT sector in 2009.

Clicking Clean: Who is Winning the Race to Build a Green Internet? can be downloaded here (PDF).