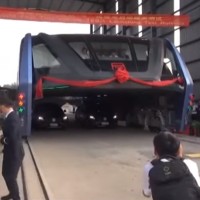 Straight from the “heck, they actually built it?” category is this futuristic electric bus, which may be solar powered in the future.

A few months back, we came across a news item about a high-tech bus that would be able  to carry over a thousand people and tower above traffic while that traffic passed underneath.

It was an interesting concept; but just a concept this writer thought – one that may not ever come to fruition; regardless of the optimism of the team behind it who insisted such a vehicle was being built.

Imagine the surprise when yesterday it was announced it had been built and unveiled. It’s been another big lesson in not to underestimate the very clever, industrious and incredibly speedy Chinese.

This incarnation of Transit Elevated Bus (TEB), also referred to as the straddling bus, is around 22 metres long, 7.8 metres wide, 4.8 metres high and can carry up to 300 passengers. 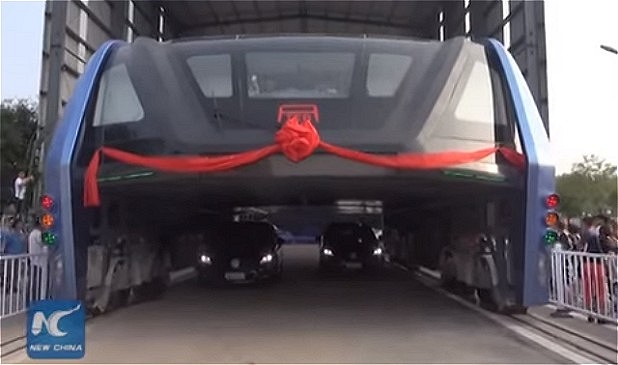 The TEB is guided along specially built tracks and its height enables vehicles up to 2 metres high to pass underneath it. Obviously intended for roads with more than two lanes, the TEB occupies the left two lanes of the road while higher vehicles can utilise the lane/s on the right. It is equipped with sensors to warn off higher vehicles and alert drivers traveling underneath that are getting too close.

Up to 4 TEB’s can be linked together, turning it into a gargantuan version of articulated (“bendy”) buses on the roads today.

The bus is currently being trialed on a 300 metre track in Qinhuangdao; a city in the north-east of China.  The tests are occurring at around 10 kilometres an hour, with the production version expected to travel at 60 kilometres per hour.

The company behind the TEB says one full-size bus (4 compartments) could take the place of 40 conventional buses and cost of construction is a small fraction of that of a subway.

Another exciting aspect about the bus is the potential for it to be solar power assisted to a degree through solar panels installed on its roof. While it would take far more solar panels to power such a beast than what the roof could support, electricity could also be provided via various forms of renewable energy to the overhead lines that power the vehicle.

A long-distance test of the TEB is expected to occur next year.

You can read more about the Transit Elevated Bus here.