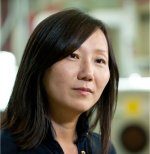 A flexible solar cell that converts sunlight into electricity even when stretched is the latest breakthrough in the work of Stanford University’s Zhenan Bao, a professor of chemical engineering who has created an artificial electronic "super skin" that also has applications in prosthetics, robotics and detection of harmful diseases.

Bao’s remarkable artificial skin is so sensitive it responds to the lightest feather touch. Essentially the skin is a carbon-based flexible transistor comprised of grids containing millions of tiny inverted pyramids imprinted on a thin rubber sheet. When pressed, the pyramids rearrange themselves, altering the strength of an electric current running through the skin.

It is this ability to sense pressure and changes to its surrounding environment that allows the super skin to “think,” sending information back to a central processing unit, such as a computer – or a human brain.

But it is the development of a "stretchable" polymer solar cell, used to power the artificial skin, that has the team really excited, and opens up a whole new world of applications. Unencumbered by grid power, or reliance on battery packs, solar energy has brought Bao’s experimental super skin into the light.

The solar cells have a concertina-like structure and can stretch by up to 30 percent then snap back into shape without losing the ability to convert sunlight into electricity.

“One of the applications where stretchable solar cells would be useful is in fabrics for uniforms and other clothes,” said Darren Lipomi, a graduate student and member of Bao’s research team.

Bao’s team have successfully shown that the super skin can detect chemical substances in vapour or liquid environments, a useful function for armed and emergency services uniforms.

Bao said the team had only recently discovered a way to stretch the solar cells across two axes, meaning they could successfully be fitted to cloth for uniforms, or incorporated into the surface structure of a robot providing autonomous solar power to the flexible super skin.