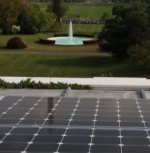 Its taken decades and nearly 4 years since approval from US President Barack Obama, but solar panels are finally back on the White House rooftop.

The installation, while of a modest size, acts as an important signal to the entire nation.

“Solar panels on the White House I think are a really important message that solar is here, we are doing it, we are doing a lot more,” said Secretary of Energy Ernest Moniz.

“I am very bullish on the future of solar energy as a key part of our clean energy future.”

Solar panels last featured on the White House in the 80’s; thanks to the foresight of 39th U.S. President Jimmy Carter who had a solar hot water system installed in the 1970’s. However, the panels were removed in 1986 by President Ronald Reagan who believed the installation “didn’t befit a super-power”.

There have been other solar installations on the White House grounds. A 9kW system was installed on a maintenance building in 2003 at the direction of George W Bush; but the system is said to be heavily shaded.

As the White House installation was unveiled, President Barack Obama also announced more than 300 organizations in the public and private sector have made commitments to accelerate deployment of solar power systems and invest in energy efficiency.

“The commitments represent more than 850 megawatts of solar deployed – enough to power nearly 130,000 homes – as well as energy efficiency investments that will lower bills for more than 1 billion square feet of buildings,” says the White House blog.

“Additionally, the President announced new executive actions that will lead to $2 billion in energy efficiency investments in Federal buildings; smarter appliances that will cut carbon pollution by more than 380 million metric tons – equivalent to taking 80 million cars off the road for one year – and will save businesses nearly $26 billion on their energy bills; and training programs at community colleges across the country that will assist 50,000 workers to enter the solar industry by 2020.”