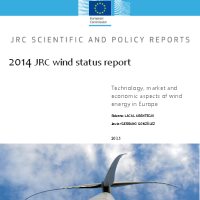 A report out last week from the Joint Research Centre (JRC) shows the EU’s wind power capacity grew to a total 129 GW in 2014.

The report also predicts strong growth into the future, with utility-scale wind expected to supply 12 per cent of Europe’s total electricity share by 2020.

Wind is set to make a huge contribution to ambitious climate goals that called for a “20-20-20” approach: a 20 per cent of EU energy consumption to come from renewable sources by 2020; a 20 per cent reduction in greenhouse gas emissions below 1990 levels; and a 20 per cent improvement in energy efficiency.

After discussions among EU leaders, these targets have since been updated for 2030: a domestic greenhouse gas reduction target of at least 40 per cent compared to 1990, and at least 27 per cent for renewable energy and energy efficiency by 2030.

According to the report, wind power has become the most widely and successfully deployed renewable technology in the world, expanding year-on-year with 2014 breaking annual records for global installed capacity at 52.8 GW.

Nearly half (23.2 GW) of these installations took place in China, which holds a global market share of 44 per cent of new wind and continued to outpace EU member states, who together installed a total of 13.05 GW.

But as the report points out, Europe’s long love affair with wind power means the Union “… still leads in cumulative capacity and its 129 GW onshore and offshore wind installations allowed six countries – Denmark, Portugal, Ireland, Spain, Romania and Germany – to generate between 10 and 40 % of their electricity from wind.”

The JRC 2014 Wind Status Report can be viewed in full here (PDF).