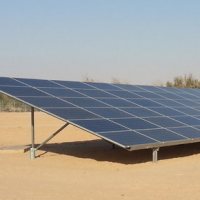 One of Israel’s largest solar projects to date, the 40MW Ketura Solar facility, was connected to the nation’s mains grid yesterday.

According to Globes, 140,343 solar panels are installed at the 134 acre facility, which cost more than USD $79 million to build.

The project is a joint venture of Arava Power and EDF Énergies Nouvelles Israel (EDF).

Arava Power is also the joint owner of Ketura Sun, the world’s first autonomously-cleaned solar power station. The panels at the 4.95MW facility are cleaned nightly by a fleet of nearly 100 Ecoppia E4 robots.

Arava Power says it has developed a substantial pipeline of PV projects, all situated in the Negev and the Arava.

EDF Israel says it is close to completing work on another project in the country: the 50MW Zmorot solar park.

Israel’s energy mix is primarily fossil fuel based and the nation is heavily dependent on imports from other nations. The country has set a renewable energy target of 10% by 2020 and its total installed solar capacity at the end of last year was 731MW.

The nation’s government recently raised the profile of PV technology domestically when 1,500 solar panels were installed at Israel’s Knesset. The 450kW system is forecast to generate around 10% of the building’s electricity.

As well as excellent solar resources, Israel has significant wind assets; but the only facility completed to date is the 6MW Golan Heights Wind Farm. However, 22MW of wind capacity is under construction and a potential 3GW is in the development stages.

While a little slow on solar PV uptake, Israel has long-embraced solar hot water. By 1967, approximately one in twenty households heated its water using the sun and 50,000 solar water heaters had been sold. Israel leads the world in solar hot water per capita; with 85% of  households today using solar thermal systems.