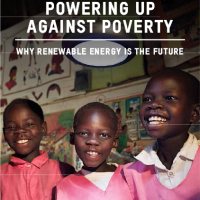 While Australian Prime Minister Tony Abbott may consider coal to be a “gift”, coal is a major threat in the fight against poverty and to our own economy says Oxfam Australia – renewable energy is the future.

A new report, “Powering Up Against Poverty” looks into the massive and negative impacts of coal on communities and how using the fossil fuel will do little to bring electricity to the estimated 1.3 billion people still living without it.

“.. our government has delivered a series of bizarre and misleading pronouncements about the future of coal. Frustrated? So are we! Which is why we’ve decided to set the record straight,” says part of a statement on the Oxfam Australia web site.

The burning of coal is a major source of carbon dioxide emissions that are driving climate change. The report states there could be 25 million more malnourished children under the age of 5 by 2050 as a result. Climate change is already impacting on yields of some staple crops.

The report points out that costs of renewable energy options, such as solar power systems, are plummeting and the world is transitioning from fossil fuels to renewables faster than predicted. Increased energy efficiency is also reducing demand for coal.

Distributed renewable energy is not only becoming cheaper; it is quicker to build, healthier, enables better self-sufficiency and energy security and is more equitable – it benefits all. It will even reduce the risk of armed conflicts.

The report quotes the International Energy Agency, which has stated developing countries have the most to gain from clean energy investment – and the most to lose from “carbon lock-in”.

Oxfam says Australia risks more than its international reputation by clinging to coal. The ongoing love affair based on unrealistic scenarios could see the nation’s economy exposed, out of step globally and poorly prepared to fully benefit from the new global energy landscape.

“The message is simple: if the Australian Government really cares about reducing poverty and inequality, it must shift its focus from coal and fossil fuels towards supporting renewable energy, both here and abroad,” says Oxfam.

The 36-page Powering Up Against Poverty report can be viewed here (PDF).