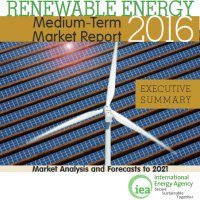 30,000 solar panels will be installed every hour around the world over the next 5 years according to a new report from the International Energy Agency (IEA).

The IEA has revised its forecasts out to 2021 after 500,000 solar panels were installed each day around the world last year. Wind power also grew at a rapid rate in 2015. In China alone, 48 wind turbines were installed every day.

The latest edition of the organisation’s Medium-Term Renewable Market Report predicts renewables growing 13% more between 2015 and 2021 than it did in the forecast last year. This would see global renewable electricity capacity increase by 42% (or 825 GW) by 2021.

The report says onshore wind generation costs are expected to plummet by a further 15% on average by 2021, while utility-scale solar PV costs may decline by another quarter. 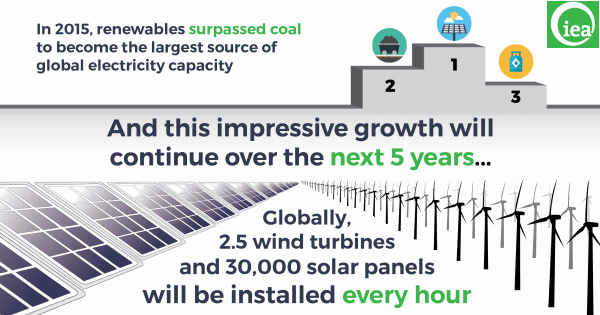 The more optimistic forecast is primarily due to improved market prospects in four key countries. This includes the USA, where a medium-term extension of  the nation’s investment tax credit (ITC) was announced late last year.

The share of renewables in the world’s overall electricity generation mix will jump from more than 23% in 2015 to almost 28% in 2021.

“I am pleased to see that last year was one of records for renewables and that our projections for growth over the next five years are more optimistic,” said Dr Fatih Birol, the IEA’s executive director. “However, even these higher expectations remain modest compared with the huge untapped potential of renewables.”

That potential will need to be more fully tapped in order to meet the objective of the COP21 global climate agreement; with accelerated penetration of renewables in all three sectors – power, transport and heat – required.

The IEA has a history of underestimating the uptake of renewable energy, so it won’t be surprising to see another revised forecast in the future.

The executive summary of The Medium-Term Renewables Market Report can be viewed here (PDF).