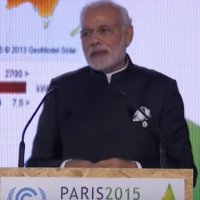 The creation of a global solar partnership comprising more than 120 countries, including Australia, was announced today at the 2015 Paris Climate Conference (COP21).

“We want to bring solar energy into our lives and homes, by making it cheaper, more reliable and easier to connect to grid,” said the Prime Minister.

The PM stated India currently has 4GW of solar capacity and by the end of next year will have added another 12GW. The country has set a target of 100 GW of solar power by 2022.

“This day is the sunrise of new hope – not just for clean energy, but for villages and homes still in darkness; and for our mornings and evenings filled with a clear view of the glory of the sun,” said Prime Minister Modi; who also committed India to sourcing 40% of its electricity from renewables by 2030.

President Hollande said the initiative would mobilise public finance from wealthier countries to help bring energy access to all.

“What we are putting in place is an avant garde of countries that believe in renewable energies,” said the President.

While the majority of countries involved in the International Solar Alliance are developing nations in Africa, Asia and South America; the USA, China, Australia and several European countries are among the ISA members.

Mission Innovation will bring together governments and investors to take clean energy projects from research and development to commercial outcomes.