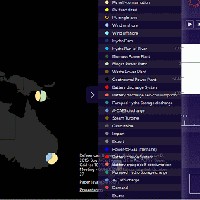 Researchers in Finland have developed a model showing how a global electricity system based entirely on renewable energy sources would function in 2030.

The simulation is designed to illustrate how renewables such as solar and wind alone can supply the entire world’s energy needs and fulfil the targets set at last year’s Paris Climate Summit.

Created by Lappeenranta University of Technology (LUT), the global Internet of Energy Model visualizes a 100 percent renewable energy system (100%RE) for the electricity sector for 2030. It splits the globe into 145 regions within an aggregated world map, and is specifically designed to discover the most economical path to a worldwide renewable energy system.

The model details by region the demand and flow of electricity, and shows how renewable sources supply this energy year round. By factoring in the best mix of renewable technologies, storage solutions and transmission components, by 2030 it predicts a rough levelised cost of energy (LCOE) of between 55 and 70 euros per megawatt-hour for all 9 major regions in the world.

“With the simulation, anyone can explore what a renewable electricity system would look like. This is the first time scientists have been able to do this on a global scale.” says Christian Breyer, LUT Solar Economy Professor and a leading scientist behind the model.

The LUT team plan to improve the model beyond the energy sector; including heating and transport sectors. They want to prove renewable energy is stable enough to run global power systems without the need for backup baseload power sourced from fossil fuels, and that wind and solar power – with the right management – can provide round-the-clock electricity on a large scale.

“My hope is that we can finally stop debating about these myths. The visualisation shows exactly how a fully renewable electricity system operates. So let’s just build it,” says Pasi Vainikka, Principal Scientist from VTT Technical Research Centre of Finland Ltd.

The researchers designed the model to be viewed by the public, policymakers and other institutions in the hope it can help generate more fact-based discussions on the global energy transition.

“We want the model to give every citizen the chance to familiarise themselves with a renewable energy system. Increased knowledge usually lowers the resistance towards new developments,” says Vainikka.

“Every country in the world has to find pathways to achieve the Paris agreement targets and to avoid stranded assets. This model can provide the help for policy-makers, industrial decision-makers and societal stakeholders to do that,” emphasises Breyer.

View the Internet of Energy Model