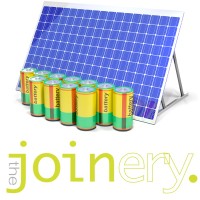 A solar power and battery system has been installed in the heart of Adelaide’s CBD; at The Joinery at 111 Franklin Street. The system will supply nearly half of the building’s daily electricity needs.

The Joinery is a result of the transformation of an old rundown bus station into a community environment space in the heart of the city by Conservation SA. It now houses a number of other organisations, including Adelaide Sustainability Center and Conservation Volunteers Australia. South Australia’s first electric share vehicle is also based at the facility.

“This project is a celebration of South Australian know-how and innovation, and reinforces our position at the cutting edge of renewable energy technology,” said South Australia’s Climate Change Minister, Ian Hunter

“I congratulate the Conservation Council for their work in promoting renewable energy use in the Adelaide Central Business District, and their use of local providers for much of the work in this exciting project.”

The system features 50 solar panels and energy storage supplied by RedFlow; which also recently delivered a much larger battery solution to the Base64 building in Adelaide.

SA’s State Government contributed $33,000 to the installation of The Joinery’s system.

It wasn’t clear at the time of writing the level of support provided by Adelaide City Council; but  it has certainly been encouraging solar + energy storage through the Sustainable City Incentives Scheme.

The Council has been offering City businesses, residents, schools and community groups up to $5,000 for installing battery systems and up to $5,000 to install solar power systems. Its battery incentive program was the first of its kind to be established in Australia.

The Joinery system represents another step towards the City of Adelaide reaching its ambitious goal of becoming Australia’s first carbon-neutral city. Adelaide was recently ranked in the top 10 globally for climate change reporting in the CDP Cities 2015 Report.

“This is a wonderful example of what we can achieve when we work in partnership, bringing our skills and passions together for a common goal,” said Adelaide’s Lord Mayor, Martin Haese.

“The Joinery is a showcase of how a low carbon future could look – with shared working spaces, harvesting and storing energy from the sun, combined with community projects in the heart of the city.”