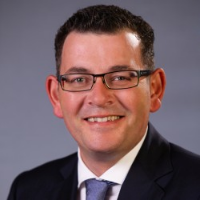 Daniel Andrews’ Labor Government was re-elected in a landslide victory in the Victorian State Election on Saturday. The win means it’s now full steam ahead for Labor’s solar panel and battery rebate program.

Andrews had promised to expand Victoria’s $1.3 billion Solar Homes program if re-elected for another four-year term. As a result, the half-price solar panel rebate scheme will now cover up to 720,000 owner-occupiers.

The government will also provide half-price solar batteries for 10,000 Victorian households, to fulfil another election pledge.

Liberal candidate for Frankston Michael Lamb says his party will get the private industry to build a power station in Victoria, if elected, but admits it will be at least partly taxpayer-funded.

ABOVE: Liberal candidate for Frankston Michael Lamb ties himself up in knots over the Coalition’s power plant plan. Labor’s Paul Edbrooke retained the seat.

A typical 11 kWh battery like Tesla Powerwall 2 or Enphase is able to reduce annual electricity bills by about $650.

In fact, the Labor Government pledged to invest $82 million on solar programs over 10 years if re-elected.

Andrews also promised to include renters in the solar and battery rebate program if given a new term. This means tenants may now save up to $890 on their annual electricity bills.

To take part, landlords will have to negotiate with their tenants to share the cost of solar installation. Owners corporations will also be eligible for a 50 per cent solar panel rebate as well as a low interest loan.

Andrews’ campaign focused on infrastructure and renewable energy. Saturday’s election win is an indication Victorians want more of the same.

In contrast, the Coalition promised to scrap the renewable energy target.

The Coalition’s energy plan also hinged on the construction of a minimum 500 MW power station.

It issued a statement on November 12: “Packaging up major government services such as rail, hospitals and other major services, a Liberal Nationals Government will seek a tender for a new 500 MW contract of supply, allowing the market to best determine the mode of generation.”

Expectations are that six new wind and solar farms under way in Victoria will dramatically reduce energy prices in the state.

The new renewable projects should generate around 1,000 MW in total.

Victorians are encouraged to apply for the Solar Homes rebates on solar panels and battery storage.

Just fill in the inquiry form. Energy Matters is a trusted solar supplier and installer accredited by the Clean Energy Council and can be used to get maximum benefit from the solar and battery rebate program.