According to Science Daily, scientists at the University of Massachusetts Amherst have constructed a gadget that utilises natural protein to generate electricity from the air’s moisture. This new technology could have huge implications for the future of renewables, as well as climate change action and even the medical field.

Electrical engineer Jun Yao, combined with microbiologist Derek Lovely, have developed technology known as “Air-gen” – air-powered generation. The generator links electrodes to protein nanowires that allow for an electrical current to be created from pure water vapour that’s in the surrounding atmosphere.

Yao says this is literally the act making “electricity out of thin air”, stating the Air-gen creates 24/7 clean energy. 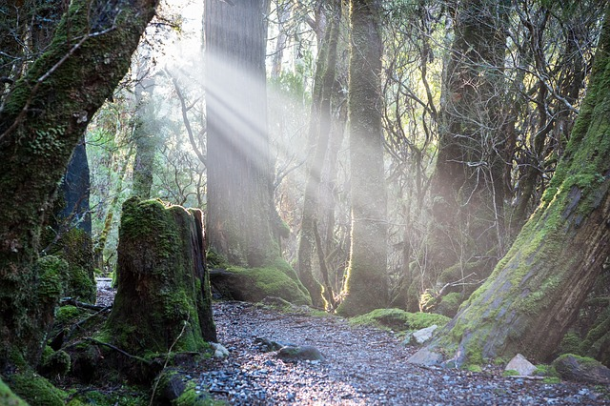 Tasmania is intent on conserving its natural environment with an ambitious goal of 100 per cent renewable energy by 2022. Image: Pixabay

Responsible for advancing biology-based and sustainable electronic materials over the last 30 years, Lovely says it’s the most “amazing and exciting application of protein nanowires yet.”

Developed in Yao’s lab, the innovation is designed to avoid pollution and is a cost-effective, renewable source. It can create power in areas that have very low humidity rates – such as the Sahara Desert, showing its extreme capability.

With plenty of advantages over current renewables, this technology of the future doesn’t require any sunlight or wind and can even operate indoors.

The device only needs a thin film of protein nanowires to work. The bottom of the technology sits on an electrode; meanwhile, a smaller electrode covers part of where the nanowire film sits on top of the system. The film then attracts all water and moisture from the atmosphere, using electrical conductivity and surface chemistry to generate a consistent current between the two electrodes.

Looking towards the future

In its current state, the technology can almost power small electronics, but researchers are expecting this capacity to expand out to a larger, commercial scale in the near future.

Their next steps are focused on wearables across health and fitness – like smartwatches and fitness trackers – which would get rid of any need of traditional batteries. Alongside this is the hope to apply the technology to mobile phones so that frequent charging isn’t required.

In the pipeline, Yao says large-scale systems are on the agenda, with the innovation of wall paint helping to power residential properties.

“We may develop stand-alone-air-powered generators that supply electricity off the grid. Once we get to an industrial scale for wire production, I fully expect that we can make large systems that will make a major contribution to sustainable energy production,” says Yao.