The new model Nissan Leaf will be the first electric vehicle in Australia that can send power back to a home battery using vehicle to grid technology.

Nissan Leaf owners can use the Leaf as a mobile battery, transporting energy from one home battery system to another.

They can also charge the car overnight from their solar battery or from the grid when the electricity rates are cheaper. During the day, that energy could be fed into the house from the  car’s 24 kWh battery, which could keep a household running for two days.

The four-door hatch Leaf will debut in Australia next summer, and cost around $50,000.

More than just a transportation device 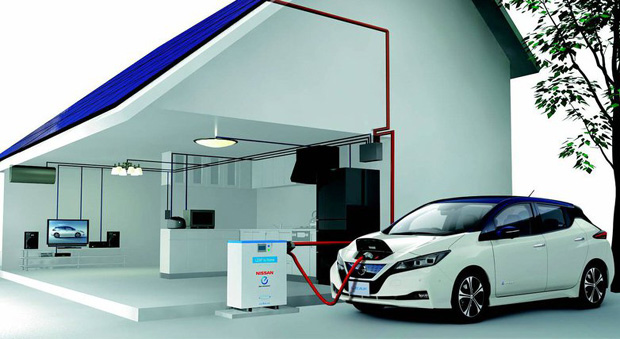 The new Nissan Leaf can store energy and feed it back into the home.

“The great thing about vehicle to grid is that it opens up a number of opportunities that are not available today,” he said.

He said technology like the Leaf’s two-way charger reduced EV running costs while also helping to stabilise the grid.

“They are an intrinsic part of the way we consume, share, and generate energy,” he said. “This will have a fundamental impact on the shift from fossil fuels to renewables.”

The new improved Nissan Leaf with vehicle to grid

The groundbreaking idea of using the car as a back-up battery came in the aftermath of Japan’s 2011 Tōhoku-Oki earthquake. Many homes were left without power and EV batteries were enlisted as a source. Today, 4,000-5,000 Leaf-to-grid installations are active in Japan.

Apart from the new inverter, the new Leaf’s power output is 110 kW, up from 80 kW. Nissan also supports the Leaf’s battery pack with an eight-year, 160,000 km warranty.

The new Leaf has a range of 240 km on a full charge. This will take 16 hours if using a 3 kW connection, or eight with a 6 kW point. Quick-charging capability will get energy reserves to 80 per cent in 40 minutes at a faster public charge point.