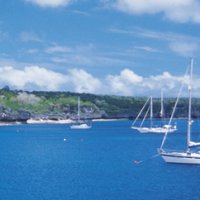 The tiny Pacific nation of Niue has recently completed an energy roadmap that sets an ambitious goal of reducing its reliance on fossil fuels by 80 percent.

Niue, the largest upraised coral atoll in the world, is situated in the South Pacific Ocean, some 2,400 kilometres northeast of New Zealand.

Like many island nations, Niue is heavily dependent on diesel fuel for power generation. While it may not face the level of threat from rising sea levels that other islands do; the country’s government is keen to wean itself off expensive fossil fuels and to cut emissions.

Currently 98 percent of the island’s electricity is provided by diesel generators and fuel imports represent more than 15 percent of the country’s GDP. Approximately 69% of diesel fuel imported into Niue is used for power generation – around 800,000 litres.

According to Radio New Zealand, while the main focus of Niue’s energy transition will be on solar power; the potential of other renewables such as wind power, biomass and wave energy will be investigated.

The transition will cost an estimated USD $26 million and the country is now looking for partners to help it towards its goals. It’s a lot of money when taking into consideration Niue’s GDP in 2009 was approximately  just USD $1.55 million.

Niue’s government is being realistic about the goal.

“You always set yourself a target and try and achieve it; not everything is achievable or a hundred percent but if we can at least fifty percent it will be, that will be a great achievement,” said the nation’s  minister for infrastructure, Dalton Tagelagi.

Electricity is incredibly expensive in Niue, particularly given its quite low average household income. According to the International Renewable Energy Agency (IRENA), electricity rates in 2013 ranged from AUD 57c to 80c per kilowatt hour.

Last year two more solar power installations were added; one outside of the Tuila power station that also features battery storage and the other opposite the Niue International Airport Terminal.

Most of these projects have been made possible through the generosity of other countries – primarily New Zealand and Japan -with the latter contributing USD $4 million.