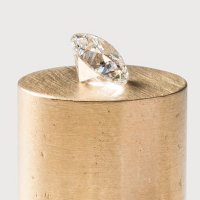 A Leonardo DiCaprio backed company is making ethical diamonds using solar energy to offset how its operations are powered.

A team of M.I.T., Stanford, and Princeton engineers, pioneers in previous breakthrough solar power technology, have created a plasma as hot as the outer layer of the sun that can attach atoms to an earth-extracted diamond and grow it in size. Each diamond consists of 10 billion layers of a quadrillion atoms each.

“One by one, the atoms stack on top of a thin slice of earth diamond and extend its unique crystal structure. Layer by layer, it grows into a pure, cultured, jewelry-grade diamond of larger size.”

The original diamond is then sliced off and can be repeatedly reused.

The company was founded to address the many ethical and environmental issues surrounding diamond mining. For example, it can take the removal of 250 tonnes of earth to extract 1 carat of diamonds. “Blood diamonds” are also mined in some parts of the world under horrid conditions and then sold to finance various wars and conflicts.

“The diamond industry unfortunately has been stained by human-rights abuses, child labor, ecological destruction, cartel-like pricing, untraceable provenance,” says the Diamond Foundry. “We felt that it was time to create a better choice.

The process consumes a huge amount of energy; so the Diamond Foundry purchases solar power credits to reduce its carbon footprint to zero.

The diamonds won’t be any cheaper than conventionally sourced gems and the company says it is only able to manufacture a small amount of diamonds every couple of weeks. The largest diamond the company has been able to produce to date is 9 carats.

Investors in the company have been liked to a “Who’s Who” of Silicon Valley. Among them is Leonardo DiCaprio, who starred in the 2006 movie Blood Diamond; which helped raise awareness regarding conflict diamonds.

“I’m proud to invest in Diamond Foundry Inc. – reducing the human and environmental toll of the diamond industry by sustainably culturing diamonds without the destructive use of mining.”