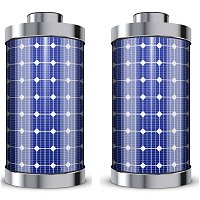 Late last week, Mayor de Blasio announced solar capacity in New York City had nearly quadrupled since the start of his Administration. He also announced an expansion of targets to 1,000 MW of citywide solar capacity by 2030. That level of capacity could meet the power needs of more than 250,000 households.

“To ensure this renewable energy is available consistently, the Mayor also committed to the City’s first ever energy storage deployment target, 100 megawatt-hours (MWh) by 2020,” says part of a statement from the Mayor’s office.

” This target will help reduce reliance on the grid by making variable sources of energy production, such as solar panels, usable for more of the day. Energy storage also helps increase the City’s resiliency by providing backup energy when the grid is offline.”

Already fuelling 2,700 jobs in the city, New York City’s new solar and energy storage goals will generate even more employment in the near future.

New York City is the largest in the world to commit to an 80 percent reduction in greenhouse gas emissions by 2050, and solar power is playing a key role in achieving that goal.

An important part of accelerating uptake has been streamlining the approvals process for small solar installations.  The average review time for solar projects was five weeks in 2015, but has been reduced to just over one week in this year.

Staten Island has led the way in New York City with installs, jumping 600 percent compared to pre-2014 levels to 3,493 systems; for a total capacity of 30.3MW. Next on the leaderboard is Queens, with 1,703 installations.

In all five boroughs, installed capacity (private installations) has reached 69 MW, up from 24 MW at the end of 2013.  2,238 private solar projects are in the pipeline, representing 17 MW of additional capacity.

New York City and State offer multiple programs supporting the installation of solar panels. New Yorkers also have access to a solar map, indicating the potential for PV modules on their buildings and across the city.