A new report from The Climate Institute indicates solar power continues to be a preferred energy source  among Australians – as for coal, not so much. In fact, there’s very little love for the little black rock.

Climate of the Nation 2016 includes the results of a survey of more than 2,000 Australians on their attitudes to climate change and related issues.

When asked to rank their top three preferred sources of energy, 86 per cent of those surveyed included solar energy and 70 per cent chose wind power; up from 85% and 69% respectively compared to 2015.

Only 12 percent of respondents listed coal among their top three energy choices.

59 per cent named solar power as their most preferred source of energy, more than five times as many who chose wind (11%) and nearly twenty times more than those who chose coal (3%).

6 percent elected nuclear energy as their most favoured, and 4% gas. 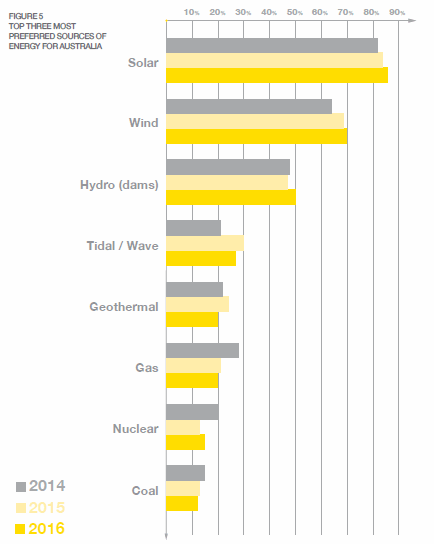 The news gets worse for coal.

“Around the same proportion of Australians agree that governments need to implement a plan to ensure the orderly closure of old coal plants and their replacement with clean energy.”

In South Australia, which waved bye-bye to local coal fired power generation this year, 76% wanted to see coal phased out gradually (compared to 70% nationally). 33% of Western Australians want to see the emissions-belching power plants phased out as soon as possible; compared to a national average of 21 per cent.

On a related note, speculation is increasing that Hazelwood Power Station in Victoria, one of the nation’s most polluting coal-fired electricity generators, will close soon. However, new owner ENGIE has said “categorically there has been no decision made”.

Climate of the Nation 2016 indicates the majority of Australian who believe climate change is occurring has reached 77 per cent; up from 70 per cent last year, 66 per cent in 2013 and 64 per cent in 2012.

“Australians, in record numbers, accept climate change is happening, and even more can see economic opportunity in the clean energy future they want to be part of,” said The Climate Institute CEO, John Connor

The full report can be viewed here (PDF).