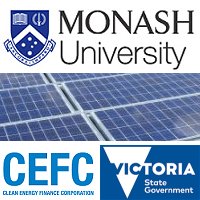 A Letter of Interest from the CEFC to Monash University was signed on Thursday night supporting the Initiative, which will incorporate new energy technologies including battery storage and smart microgrids.

The Letter was witnessed by Minister for Energy, Environment and Climate Change Lily D’Ambrosio. A separate Memorandum of Understanding between the Government and Monash University with regard to the initiative has also been signed.

“We’re pleased to work with government and industry on the Monash Microgrid as we develop and advance the latest research to secure our energy future.”

Monash University has historically been a hotbed of activity on the renewables and building energy efficiency front.

Another recent feather in its cap is the University’s nomination in three building sustainability awards relating to the renovation of a 1960’s warehouse on its Clayton campus.

“This project was innovative in its use of Passive House principles and showcases how existing carbon-intensive building materials can be successfully reused to create energy neutral spaces,” said Manager of Engineering and Sustainability, Dr Robin Brimblecombe.

Monash was the first Australian university to commit to an energy reduction target and has an emissions reduction target of 30% below 2010 levels by 2020. Energy consumed by all its campus buildings contributes to 78% of Monash University’s carbon footprint.

Across all its Victorian campuses, the institution has 550 kW of solar power installed. It also purchases Greenpower and has offset its carbon emissions via this source by a cumulative total of 125,492 tonnes.

Aside from the environmental benefits, Monash has good financial motivation for energy efficiency – it has an annual utility bill of $15 million.