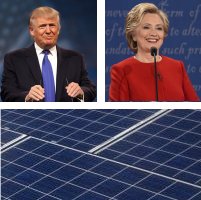 The first presidential debate held yesterday morning Australian time covered whatever Donald Trump felt like talking about at any particular moment – and even solar power got a mention.

To be fair, it was Hillary Clinton who initially raised the issue of solar; which in turn raised The Donald’s ire.

“Take clean energy. Some country is going to be the clean- energy superpower of the 21st century. Donald thinks that climate change is a hoax perpetrated by the Chinese. I think it’s real,” said Ms. Clinton.

The former Secretary of State and presidential hopeful went on to say:

” And I think it’s important that we grip this and deal with it, both at home and abroad. And here’s what we can do. We can deploy a half a billion more solar panels. We can have enough clean energy to power every home. We can build a new modern electric grid. That’s a lot of jobs; that’s a lot of new economic activity.”

The mention of half a billion solar panels wasn’t just a vocalised thought bubble inspired by the heat of the moment. In July last year,  Hillary Clinton announced a couple of very ambitious renewable energy goals should she attain the presidency.

The first, more than 500,000,000 solar panels to be installed across the USA by 2020.  This would be enough solar capacity to power more than 25 million US homes. The second goal is to have enough renewables rolled out within ten years of taking office to power every home in America.

“She talks about solar panels. We invested in a solar company, our country. That was a disaster. They lost plenty of money on that one,” he said

“Now, look, I’m a great believer in all forms of energy, but we’re putting a lot of people out of work. Our energy policies are a disaster. Our country is losing so much in terms of energy, in terms of paying off our debt. You can’t do what you’re looking to do with $20 trillion in debt.”

The “solar company” he referred to is likely Solyndra. The company went belly-up way back in 2011 and has been used to beat solar power supporters over the head with ever since. What Mr. Trump didn’t acknowledge is all the successful investments that have been made.

Mr. Trump may not be aware the USA’s solar industry is booming, and along with it related jobs.

The second quarter of 2016 saw 2,051 megawatts of solar panels installed in the USA; a 43 percent increase over Q2 2015. In 2015, the U.S. solar workforce grew to nearly 209,000; adding more than 35,000 workers. Add to that the expected solar + storage jobs in the years ahead and the future looks bright indeed, unless anti-solar forces throw a spanner in the works.

The full transcript of the first Presidential debate can be read here – pack a lunch before venturing out to it, it’s a long one.