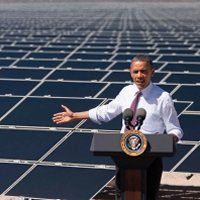 The Obama Administration has announced a new major initiative that will increase access to solar power for all Americans, with a special focus on low income households.

Part of the program will see an increased goal of installing 300 megawatts (MW) of renewable energy in federally subsidized housing.

In the President’s Climate Action Plan (2013), a goal of installing 100 megawatts of solar and other renewables in federally subsidized housing was set. That goal has already been surpassed (185MW) according to the White House, hence the new benchmark.

More than USD $520 million has also been pledged in independent commitments to boost community solar and increase uptake of solar panels and energy efficiency in low- and moderate- income households.

The National Community Solar Partnership will bring together multiple government agencies and solar companies, charged with the task of improving access to solar for the nearly 50 percent of households and businesses renting premises or that do not have sufficient roof space to install solar panels.

“The executive actions and private sector commitments that we are announcing today will help continue to scale up solar for all Americans, including those who are renters, lack the startup capital to invest in solar, or do not have adequate information on how to transition to solar energy,” says part of a statement from the White House Press Secretary office.

Other elements of the initiative aim to enhance employment opportunities in the USA’s solar industry. These include funding for the government supported civil society program AmeriCorps to roll out solar power systems and create jobs in underserved communities, plus expansion of solar energy education and opportunities for job training.

It’s expected that by the end of the first year of the program, AmeriCorps members will have assisted in installing solar panels on 1500 low-income homes and 200 economically disadvantaged workers will have gained jobs in the solar industry.

These actions will build on the President’s goal of training up 75,000 workers to enter the nation’s solar industry by 2020 and the Solar Ready Vets Program.

President Obama’s passion for solar has played a major role in uptake of the clean power technology in the US. In 2014, the United States connected as much solar energy to the mains grid every three weeks as it did in all of 2008. The National Solar Jobs Census 2014 states the industry added workers at a rate nearly 20 times faster than the overall economy.